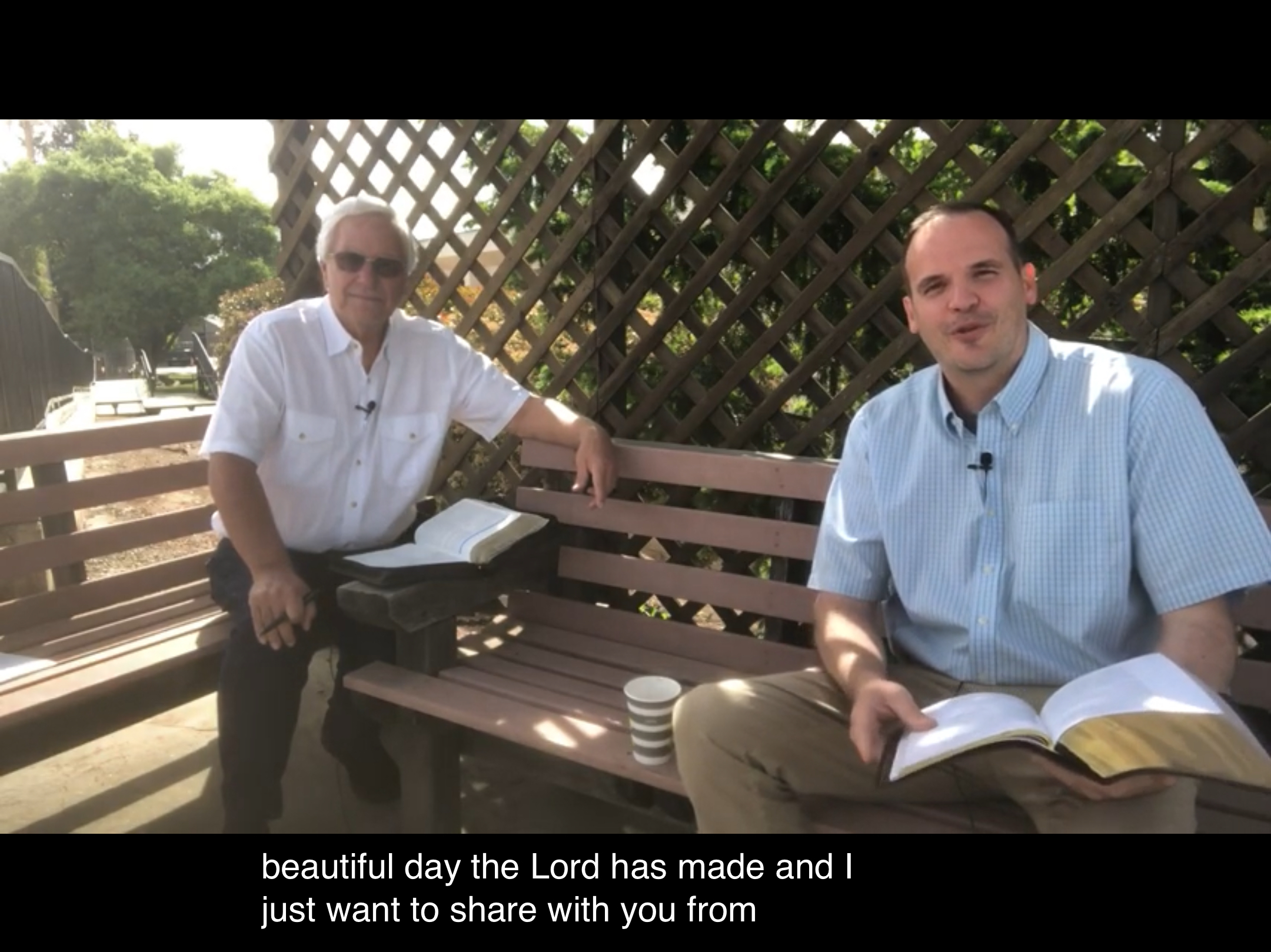 In February, Pastor Cliff announced to the church his plan to transition away from his staff pastor role at the end of June. We are thankful he's continuing to serve as an elder. In his words, he’s not stopping or retiring from ministry, he’s just stepping away from office tasks and redirecting his gifts to serve outside the office. He’s also refocusing on family in this season of life, including ministry with his beloved wife Sue to seniors in our congregation and as a couple with additional Joni and Friends initiatives.

I want to take this time to share a tribute to my good friend I have served so closel with these last several years. Hebrews 13:7 calls us to emulate the example of our leaders and 1 Thessalonians 5 calls us to “appreciate those who diligently labor among you ... esteem them very highly in love because of their work” (v. 12-13 NASB). Cliff has been one of those in my life. I know he prefers to serve behind the scenes, but he's not here now in the office to stop me from writing this :) My goal isn't to embarrass or exalt my brother, but to point out evidence of God's grace at work and to honor the above scriptures

In the fall of 2006 our family first arrived in Shingle Springs after a long drive from LA. As we pulled into our driveway, we were met by a bunch of smiling people who rapidly unloaded the trailers. Someone affectionately called it “Extreme Home Move In: Church Edition.” Georgia was a baby and our 2 little girls initially thought Janice Austin and Mary Lou Carruthers lived at that house since they saw them when they first walked in. I was struck by the welcoming hospitality and thoughtful practical service of Cliff and Sue who brought us dinner that first night. Since then we’ve experienced their hospitality and care so many times as so many of you have.

A deacon at the time, Cliff has served me and my family from day one and has been such an example of a servant’s heart since I first met him nearly 14 years ago. Before we were in the new building he was leading the college Sunday school class meeting out on the sidewalk in the heat (no room inside). I was struck by his flexibility and adaptability (and now we’re all meeting outside :) What also stood out to me is his concern for truth as he taught on defending the faith, the emergent movement, and other classes he prepared on top of his busy law enforcement work schedule.

As he served the church so faithfully through the years he was attending seminary, and in his willingness to serve since then in virtually any way needed (what he calls “other duties as required”) he’s been a continual example to me of a servant-leader. At Saturday work days he was always there - I recall him once talking with another guy his age wondering how come the “old guard” wasn’t showing up to the work days anymore - till it dawned on them, they were now “the old guard” (his words :)!

He has served me as a younger guy so well through the years. In fall of 2012 as GCBC needed to hire a second staff pastor, Cliff’s heart and willingness to serve so sacrificially rose up. We're uniquely blessed in God's perfect provision these nearly 8 years. In support, Cliff agreed from day one to go above and beyond, for the good of Christ's church. Many older pastors would find it hard to be in an associate role to a much younger pastor-teacher. But Cliff’s servant heart made it a blessing. I was 31 when I came on staff, Cliff in his 50’s, and I needed an older brother and partner in ministry. I used to joke what I lacked in maturity, I made up for in inexperience! But I’m thankful Cliff has been so faithful in sharing his experiences and helping mature and balance me.

I’ve experienced countless weekday mornings with Cliff asking me if he can make me a cup of coffee or anything he can do to support throughout the day, from logistics to loving prayer for me. In ten thousand little things he’s used his gifts in practical ways. He’s lovingly pointed out when I've done what others can help with and shown me areas of growth that deepened our friendship.

The Bible says “faithful are the wounds of a friend.” Cliff has been a faithful friend to me in this, pointing out sin and ways I can wound others, which I appreciate. I even appreciate his jokes, most of the time, at least!

We’ve been in ministry trenches together since 2012 and I'm glad my veteran friend will be continuing his care and counsel with our band of brothers. I know all credit and glory is to Christ but I thank and love you brother. May you know the love of Christ our servant-leader and His people in this time of transition this summer.

Cliff has always been a faithful friend and servant for Christ. He always has a smile on his face and willing to help when ever he can. We have enjoyed meals, ministry, discussions and worship together for about 28 years. He and Sue are a great team and so encouraging. We are grateful for his service as a pastor and look forward to continuing to serve together in ministry in the future. Blessings to you in your next stage of adventure

What a beautiful tribute! So thankful for you both and know the Lord has many more plans for both of you. May He continue to be glorified in and through your life Pastor Cliff.

Thank you cliff for all your support and care the years we have been together at gold country. We remember the 1st day you came to church as you and sue came thur the doors and we introduced ourselves. Enjoy your time with those precious grandchildren love Duane and Mary lou

A great testimony to a faithful man! Thankful for you both!

Come All You Unfaithful?

Come All You Unfaithful?

Praising God for His Love

The book of James - a video introduction

Legacy of the Saints - Katie Luther

Pray for our brethren in Canada - UPDATE

“Wokeness” and our Witness

Updates on My Former Classmate in Jail for Church Gathering

How to Pray for Your Church and Its Leaders

A Counter-Cultural Conversation on Social Justice, Race, the Gospel, and Movements like BLM

More Encouragement from a Sister in Christ

Moving to One Service Outside & Update On State Guidance

Encouragements from sisters in Christ

A Pastor’s Prayer for Minneapolis and our Nation

Questions on Meeting at God’s House and in Our Homes or Other Places, Part 1

Church and State in a Health Crisis, Part 1: Biblical and Historical Notes

Joining In A Week of Prayer Together

Waiting for the Lord