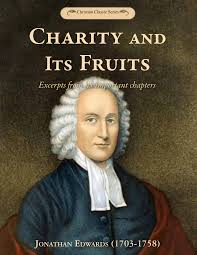 In my last Sunday sermon here I mentioned this message by Jonathan Edwards. For the first part of this series of blogs, click here

Jonathan Edwards preached during the revival known as the Great Awakening where the Spirit of God moved mightily in the American colonies in the 1730s-1740s. During that time he preached a series focusing on the fruit of the Spirit of love (charity in the KJV of 1 Corinthians 13) that manifests in patience, joy, longusffering, etc. (compare Galatians 5:22-23 to 1 Corinthians 13:4-6). Edwards wrote about the marks of a true movement of God's Spirit, and argued in this preaching series that the miraculous gifts of the Spirit were temporary to the 1st century time of the apostles (see 2 Corinthians 12:12, Ephesians 2:20, etc.).

On the one hand, Edwards takes 1 Corinthians 13:12-13 as referring ultimately to heaven in his final sermon "heaven is a world of love" (click here for more on that). On the other hand, his sermon on 1 Corinthians 13:8 ("where there is prophecy, it will pass away, where there are tongues, they shall cease ...", etc.), discusses the end of these gifts in New Testament times. This article discusses this more than I had time for in last Sunday's message, but I mentioned I would share more notes.

Sermon 14 of Charity and Its Fruits on v. 8 (“Divine Love Alone Lasts Eternally”) returns to love as compared to the temporal sign gifts:

- tongues (defined as a supernatural ability in “languages, which they never learned”)

- knowledge (defined as the “particular, miraculous gift, which there was in the church of God in those days”).

Edwards says these were given only “till the canon of the Scripture was completed” and “for an age, during the life of the Apostles, or till the death of the last of them … the apostle John.”[i]

"[The] first century, was the age of miracles. But soon after that, the canon of the Scripture having been completed, when the apostle John had written the book of Revelation, which he wrote not long before his death, [[these miraculous gifts were no longer continued in the church]]. And so there being now completed an established written revelation of the mind and will of God, wherein he had so fully revealed his mind and will, a standing rule to his church in all ages; and … the last dispensation of the church of God being established, then the miraculous gifts of the Spirit ceased. And though they had been continued in the church for so many ages, yet then they failed, as being that for which there was no further occasion. And so, that in the text was fulfilled [Edwards then quotes v. 8]”[ii]

Edwards also uses language of a “maturity” view regarding the “perfect” in 1 Cor. 13:10. He explains the apostolic gifts “argue the imperfection of the state of the church, rather than the perfection … if I may so say, to the church in a state of infancy … But being once established … the church is come, as it were, to the stature of a man … working miracles [are v. 11’s] childish things in comparison with that nobler fruit of the Spirit, divine love.”[iii] Sermon 15 explicitly equates the church’s “infant age” with the time before the canon was complete,[iv] likewise to the “imperfect” in Sermon 14. His primary argument relies on Scripture’s sufficiency and the finality of revelation in the closed canon as crucial in considering the revelatory gifts or any supposed new revelation (which some evidently were claiming in the colonial awakening times).

Second. This should make persons exceedingly cautious how they give heed to anything which looks like revelation, or any extraordinary gift of the Spirit. If any persons have any impression on their mind, as though something were immediately revealed to them which would come to pass … or if they imagine they have immediate direction from heaven to go and do thus or thus … these things, if they were from God’s Spirit, would be of the nature of those extraordinary gifts of the Spirit which the Apostle says do cease, fail, and are done away, and which long since failed; and which we have no reason to think God is about to restore … after a considerable cessation." [v]

Edwards earlier used language almost like another view (called “open but cautious” in modern times)[vi] when he spoke of the miraculous gifts as “for a season, and their either have already ceased or the time will come when they will cease” (Prop. III, italics added). But perhaps this potential future language was not because he saw any evidence of charismatic gifts in post-NT history or in his present time of “Great Awakening.” He may instead be acknowledging some in his day hoped for a glorious future era where there might be restoration of these gifts, based on some prophetic scriptures where the Spirit would be poured out in more excellent and abundant ways than ever before in latter days. His answer: “That may be, and yet there be no such extraordinary gifts bestowed. When the Spirit of God is poured out for the producing and promoting divine love, he is poured out in a more excellent way than when he is poured out in miraculous gifts, as the Apostle expressly teaches in the latter part [of 1 Cor. 13, i.e., v. 9-12].”[vii]

Not every nuance of modern debates is addressed by Edwards,[viii] and regrettably he doesn’t interact with the argument that v. 10 and 12 may refer to the second coming or eternal state rather than the end of the apostolic age. But Edwards does connect Paul’s argument about love to the eternal state in heaven when after giving his arguments on the close of the canon and the maturing of the early church: “The heavenly state is the most perfect of all. But yet the Apostle teaches that in that state those gifts shall all be at an end, and the influence of the Spirit in divine love only remain, as is plain in the by the text with the following verses [v. 9-12].”[ix] This student wishes he had further explained that in relation to the church of this age before heaven, although Edwards was not then interacting with modern charismatic arguments. Still, it’s clear Edwards doesn’t mean tongues and prophecy only cease “when we all get to heaven,” since earlier he clarified miraculous gifts “God was once pleased to grant to his church in this world, But when those saints who once had the enjoyment and use of those [miraculous] means of grace came to heaven, those miraculous gifts as well as other means of grace ceased.”[x]

The final post in this series will discuss the final messages of Edwards on 1 Corinthians, where he discusses beautifully the final state of believers, in "Heaven is a World of Love." As we await our final perfect State, or the Lord's return, let's live in love and pray for a revival of love in our hearts and churches, and share that love to the world.

[iii] Works, 8:362–363, quoting v. 11, italics added. He argues also that the church’s “infancy” was shortly after Pentecost, and its maturity came later in the book of Acts. Here the 1852 original publication expands on the infancy-maturity analogy with this comment edited by Tyron Edwards (p. 458): “They are adapted to the childish state of the church, while holy love is more to be expected in its full grown and manly state; and in themselves they are childish, in comparison with that holy love which will so abound in the church when it comes to its perfect stature in Christ Jesus [Eph. 4:13].” Ramsey notes Jonathan Edwards himself expands on this childhood-manhood more in a sermon preached 10 years later on 1 Cor. 13:8–13: “The extraordinary influences of the Spirit of God imparting immediate revelations to men were designed only for a temporary continuance while the church was in its minority, and never were intended to be statedly upheld in the Christian church.” Ramsey states “The later sermon [in 1748] is actually a more forceful and lengthy assault upon claims to immediate revelation and ‘spiritualism’ among extremists in the aftermath of the Great Awakening” (Ramsey’s editorial footnote in Works, 8:363-64).

[vi] Robert L. Saucy, “An Open But Cautious View,” in Are Miraculous Gifts for Today? Edited by Wayne Grudem (Grand Rapids: Zondervan, 1996), 95-148. An argument not presented by Edwards but persuasive to this student is the apostolic age view of Samuel E. Waldron, To Be Continued? Are the Miraculous Gifts for Today? (Calvary Press, 2007). This ties the miraculous sign gifts to the apostles within the Corinthian context (2 Cor. 12:12, cf. Acts 2:43, 5:12), which ceased when the apostles ceased after the church’s foundation was complete (Eph. 2:20).

[vii] Ramsey, 363-64. Edwards argues based on the superlative “excellent way” language of 1 Cor. 12:31: “Surely, the Scripture speaking of the future glorious state of the church as such an excellent state gives no reason to conclude that the Spirit of God will then be poured out in any other way than in the most excellent way. Doubtless the most excellent way of giving the Spirit is for the most excellent state of the church. The state of the church being so much more perfect than any which went before does not argue that than there shall be extraordinary gifts … For surely it will not be more glorious than the heavenly state. But yet the Apostle teaches that in that state those gifts shall all be at an end, and the influence of the Spirit in divine love only remain.” It seems clear Edwards saw there was a cessation of these gifts in the early church, but he addresses the question of some who thought there might be a future restoration after so many centuries before the final cessation of these gifts (maybe not just revivalists or and enthusiasts, but some millenialists also might have seen this in end times prophecies like Joel 2, Revelation 11, etc). Edwards himself looked to a glorious future outpouring of God, but he saw even from revivals in his own day “this will be enough without revelations or miracles to produce all the effects which need to be produced in order to bring about the glorious times, as we may be convinced by the little which we have seen in the late outpouring of the Spirit of God in this and the neighboring towns” (Strobel ed., 276, speaking of the Great Awakening of 1734-36).

[viii] For further reading on this beyond the scope of this paper’s argument, see Philip A. Craig, “‘And Prophecy Shall Cease’: Jonathan Edwards on the Cessation of the Gift of Prophecy,” Westminster Theological Journal 64, no. 1 (2002): 163-84. See also John D. Hannah, “Jonathan Edwards, the Toronto Blessing, and the Spiritual Gifts,” Trinity Journal 17, no. 2 (Fall 1996): 167–189, see especially “Edwards and the Argument of the Cessation of the Miraculous Gifts” on p. 183-85.

[x] Works, 8:355. Italics and brackets added to emphasize Edwards has in mind those in NT times who had those gifts, which ceased in history when they went to heaven, as he goes on to argue in the pages that follow.

The Attributes of God - Recommended Reading